Out with the old, in with the new

Fox Rothschild LLP, a Philadelphia based law firm with 500+ attorneys, is committed to “utilizing advanced technologies to effectively service and collaborate with clients in the highest quality manner.” With 15 offices spread across the U.S., leveraging technology plays a key role in servicing clients.

When Fox Rothschild initially sought to upgrade its antiquated analog tape dictation system, the firm searched for a solution that would not only replace old technology, but one that could be leveraged in multiple ways to help increase attorney mobile productivity, redistribute work more efficiently and reduce costs. The chosen business partner was BigHand.

Getting more done with BigHand Mobility

When the firm rolled-out BigHand’s workflow digital dictation system and Smartphone solution, allowing for dictations to be sent from a BlackBerry®, attorneys could instantly access office-based support staff anywhere and at anytime. With multiple sites using the BigHand solution, teamworking among support staff across offices has been made possible, improving turnaround time and increasing support staff efficiencies.

“The office staff now receives work the minute it is completed and submitted by the attorney, smoothing out the peaks and valleys in their working day. In addition, the work comes through in smaller ‘snippets’ making it easier for support staff to prioritize and share work,” explained Gail Persichilli, Software Licensing and Project Integration Specialist, who oversaw the implementation of the BigHand solution.

“Furthermore, support coverage is always dependent on whether an assistant is available or not. With BigHand, the night support team gives an attorney additional peace of mind that their work is going to get finished that day even if their assistant has already left.”

Suzanne Homel, Chief Administrative Officer, continued, “With dictations now available in individual packets, work can be done quicker and more efficiently. Turnaround time has significantly improved due to the BigHand Smartphone solution, which avoids attorneys having to return to the office like they did with tapes.”

The ‘Buzz’ for BigHand started to spread among attorneys once they began to see the many ways the BigHand Smartphone solution could be used, including verbal delegation and recording their time, ensuring billable time was being fully documented.

Jeffrey Sultanik, Partner, commented: “When I am away from the office, I use my BlackBerry® device for all forms of dictation. I now use BigHand on my BlackBerry to record time that was not previously being captured. I am on the road a lot, so being able to send voice recordings to my assistant in an organized fashion is a Godsend to me.”

Jeffrey continued, “When it came to emergency dictation before, I would leave extended messages for my assistant that she had to transcribe by listening to her voicemail. With BigHand on my BlackBerry I am now able to submit the same dictation off my Smartphone with the ability to prioritize and track its progress.”

“In the 20 years that I’ve been involved with training, I’ve never had a project go so well,” explained Gail Persichilli. “BigHand was implemented by Graffen Business Systems, based in Conshohocken, PA, who have been great - their responsiveness has been phenomenal,” she said. “When we rolled out the Smartphone solution of BigHand, that’s when the buzz really began to spread among the attorneys. On a daily basis I get emails asking when they are going to get BigHand in their office.” In conclusion, Suzanne Homel, CAO, said: “BigHand has been a fantastic success. With 8 offices already completed, we are in the process of rolling out to the rest of the firm starting this month and hope to finish up within the year” regardless of geography. 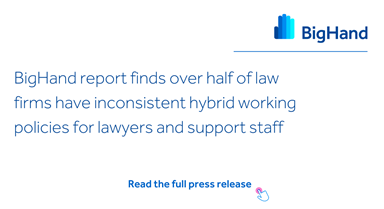 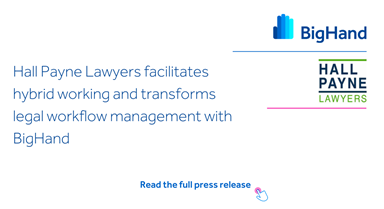 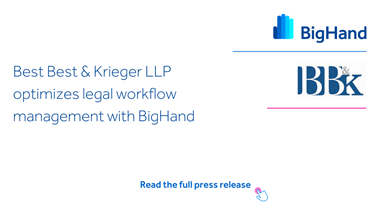 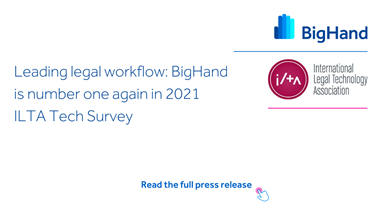